My friend recently posted a meme that said something along the lines of, “I don’t know who needs to hear this but living your most fulfilled life does not have to include hiking.”

The hiking up here is spectacular. We’ve hiked this one trail twice. It’s called Blood Lake. The first time we went I was dubious; was it called Blood Lake because everyone was bloody by the time they got there? Or because the mosquitoes were so intense the lake was filled with their heavily-swollen-with ill-gotten-hikers’-blood bodies?

It turns out the trail is delightful. It’s about 1.5 miles undulating through dappled meadows of late summer wildflowers and rippling groves of Aspen. It’s so beautiful that Denise kept having to call to me, and finally at one point said, “Okay Skip, can you put your camera away and actually be here enjoying it please?” (My dad is notorious for long photography stops. So was his dad. I happen to believe it skipped me but there may be those who disagree.)

The last 1/2 mile is pretty much straight up. You turn and start climbing up the back face of some very chunky granite walls, which eventually spits you out top to Blood Lake. Your heart rate climbs quickly, too. Your legs feel it. There isn’t much room to think about anything other than breathing and climbing up heel toe one step at a time.

I was born sensitive. I got sick a lot when I was a kid. I grew up feeling like I was fragile. I think really I was strong, I just didn’t have the tools to work through things and express myself. When I started to try I was told I was so sensitive. Not in a good way. Is there a good way? I think so. I think it’s wonderful to be so sensitive that you can feel things vibrating in you like a hummingbird even though someone might have barely whispered. Or not spoken at all. I think it helps me feel the world and I want that. But it used to scare me down to the core. And since I believed firmly that it was a bad thing, I shoved the feelings under and through and down. Which led to a lot of anxiety and panic as I got older.

The thing about a lot of emotional challenges in life is that what seems counter-intuitive is often what I need. When I’m depressed and scared I want to hide, when sometimes what I need is to get out and remember that I am in my body. Move. Sweat. Feel the heart rate rise.

It’s even better to be able to feel safe enough to say, Here is how I feel. Really. I feel scared of rejection. I feel antsy. I feel like I don’t matter. I feel like maybe nobody really knows what they’re doing and what’s the point of it all anyway?

I think one of the things that drew me to music was the understanding that you could express whatever you want to through song and it is safe. There is a way in which, through performance, you can hide some of the true vulnerability. Strip yourself all the way down, but it’s still song, you know?

Lately I’m working on saying things without music. Just speaking. Without wondering if it’s okay or not. Without melody. It’s a work in progress. My friend and teacher Terri said to me that we humans haven’t gotten to the point where we can truly be raw and vulnerable, that we play with it, we dance around it, but we haven’t quite dropped the costumes. Because it’s scary. But I’m trying.

Anyway back to hiking. So we’re about halfway up to the end, huffing and puffing, and we come across two parents and their son. The son looked to be about 6 or 7 and he was really feeling. He was hurling it out across to his parents and all of nature and other hikers. He was TIRED, and he was MAD, and he felt CHEATED, and he DID NOT WANT TO KEEP GOING.

As we got closer, we could hear the parents calmly responding. “Well, Connor, we all made this choice. I think it’s worth it to keep going. You can swim when we get there, it’s supposed to be really beautiful. You can explore the rocks. I get that you’re upset.” etc.

The thing is, we’re all doing it too. All of it all of the time. Some of us admit it and some of us don’t.

I do love that burn.

About 10 minutes after we got to the lake, we were sitting on a bench enjoying the view and feeling the sweat dry, and we saw Connor and his parents make their way to the water’s edge and put their backpacks down on a big boulder. “See? We made it!” the mom shouted, waving to us.

“Hooray Connor! I knew you could do it! Isn’t it great!” I shouted back.

Connor looked up and yelled, “Yes but I’m A THOUSAND TIMES TIRED!!!”

We all are, Connor. But it’s worth it.

All day last Saturday (or for like an hour) we prepped by blasting our favorite numbers: “MotownPhilly,” “It’s So Hard to Say Goodbye to Yesterday,” “End of the Road” etc. The Boyz were playing with the Utah Symphony outdoors at the bottom of Deer Mountain, a 15 minute walk from our little summer spot.

As we walked I got excited; I’d never seen them live before and it was throwing me back to college when they (and I) were new. “I hope they play all the songs from CooleyHighHarmony,” I said. “I doubt that’s possible with the Utah Symphony,” Denise said.

In August of 1991 I was still 18. I was fresh off a long cold summer in Alaska on the boat with my parents. I was yearning to get back to college for my sophomore year. My friend Kristin had just gotten a car and was driving it cross country. Would I like to drive with her? I would.

I flew to San Francisco to meet her. Got my luggage, went to the parking lot, loaded the car.

“You know how to drive stick, right?” she said.

So that day Kristin drove first. Out of the steep winding-ness that is San Francisco. Somewhere near Sacramento she handed me the keys and I took over. By that I mean that for the next five days when it was my turn to drive I would shamefully grind my way from 1st to 3rd gear; once I got through 4th I was okay. Interstates were a breeze. God help us if there was traffic. (There was always traffic.) Kristin and her little Toyota Camry were very patient with me. So I learned. Herky jerky. But I learned.

And through it all, we had the new Boyz II Men tape! They had burst on the scene that spring with their debut album, CooleyHighHarmony, produced by Michael Bivins from Bel Biv DeVoe (now you know). So smooth. So hype. We practiced our harmonies with them: “MotownPhilly” over and over and over. Windows down, through the Rockies, through the plains, through Ohio, Pennsylvania, all the way to Connecticut and a stop to get a pint of Ben & Jerry’s chocolate chip cookie dough ice cream, it was Boyz II Men. And we were one of them.

My memory of that drive is a little scattered. I remember feeling insecure about everything: figuring out my major, figuring out a hidden crush, figuring out if I could sing, figuring out how to drive stick. I remember how flat Kansas was. I remember we got stopped somewhere in Colorado (maybe Glenwood Springs) and got out and chatted with the guys in the car in front of us, who took our picture. I remember the picture. I wish I could find it. We were wearing bicycle shorts (why?). We looked really young. We were.

I remember finding a Shaky’s Pizza next to the motel where we were staying for $35.99 one night, and drinking an entire pitcher of root beer and staying up late laughing on a sugar high.

Last Saturday they didn’t play “MotownPhilly”. Denise was right. It would’ve been tough with the symphony. But they sure did sing their slow stuff smooth. We stood and danced and smiled and looked around and felt good. Middle-aged. Married. Content. The sunset was beautiful.

I hope time is a burrito. (See “Peggy Sue Got Married”) I hope last Saturday went back and hit me in August of 1991 so I could feel how very good it gets.

Hang in there, Sarah. You’ll be just fine. 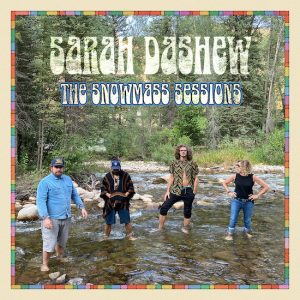 Three for Friday. Dear friends on a cold perfect b